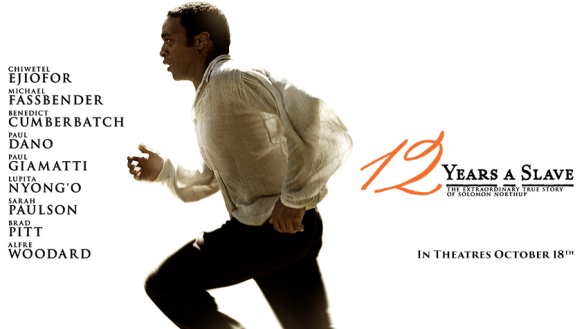 I wasn’t really sure what to expect when it came to this movie. When it comes to movies that have the intention of telling the story of the African American Holocaust/Slavery I find that something always seems to be missing. The depictions are watered down. “The Butler” which is a great movie is an example of this. The African American Holocaust/Slavery and Civil Rights can not be summed up in stock videos and a few pictures of Harriet Tubman and Dr King. It is a complex, layered, and gruesome history that must be told in its totality.

“12 Years A Slave” does an exceptional job at pulling the curtain back on the history of America when it comes to its mired past.

“12 Years A Slave” is based on a true story from the 1853 biography of Solomon Northup. Solomon Northup played by Chiwetel Ejiofor was a FREE BLACK MAN from Sarasota Springs New York, who was kidnapped while he was in Washington DC in 1841 and was sold into slavery. He spent 12 yrs as a slave.

There were a few scenes that stood out. One scene in particular involved Solomon who was renamed Platt after he became a slave. William Ford his master at the time was having difficulty moving lumber down the narrow Indian Creek in Louisiana. Platt explained to him that he could build log rafts and use those to ship his lumber down the creek. As he was giving his explanation one of the overseers Tibeats was looking extremely confused and jealous because of Platt’s extensive knowledge. William Ford looks at Tibeats and explains how he is impressed with Platt’s knowledge. Tibeats turns to Platt and asks him “Are you an engineer or a nigger?”

That specific question resonated with me specifically because of the hyper racial society we live in now.

Solomon/Platt maintained a dignity that seems to be lacking in our society today.

In  2013 we have people who are comfortable with being called and labeled niggers. We are bombarded with buffoonery. Many times the worst examples of who we are broadcast throughout the world as a representation of our culture.

It’s time to draw a line in the sand.

When I tell people Im a rapper I get a look from them….a confused look.

They may say “You don’t look like a rapper.” or ” Where is all of your jewelry?”. I could go on and on with the assumptions and judgements people make with respect to me being a rapper, but that would take up my entire post.

I come from a school of thought that understands the ability that all of us have as human beings. I represent a culture that at its best is truly the voice of who we are. We educate, we learn, we have fun and influence the world.

I feel like Hip Hop has been enslaved for the past 20+ years and its time to free ourselves. We must never forget who we are. We can never forget our purpose.

Our purpose is to change the world.

I am a Rapper not a nigger.

Listen/Buy my song “It’s On Me” produced by Tye Hill and Dj Thunder below.