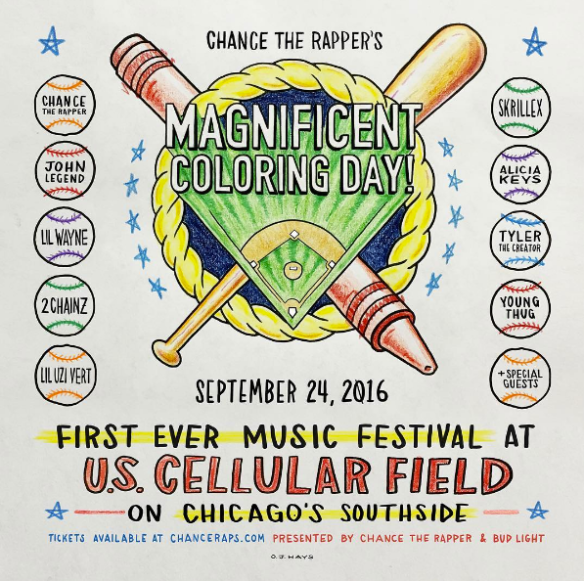 Chance the Rapper continues his rise and increases his relevance to the music industry. Chance is kicking off his national tour known as “Magnificent Coloring Day Festival” at the Cal Coast Credit Union Open Air Theatre in San Diego on Sept. 15. The most anticipated date is arguably Sept. 24 when he returns to Chicago and hosts the first ever festival to be held at U.S. Cellular Field on the South Side of Chicago, the home of the Chicago White Sox.

This is yet another accomplishment in the this independent young artist’s career. Earlier this year he partnered with New Era to redesign the White Sox Cap. The design of the cap is similar to the logo of the musical collective, The Social Experiment. The collective was founded by Chance and Donnie Trumpet.

Chance is bringing along a few of his industry friends. John Legend, Alicia Keys, Skrillex, 2 Chainz, Young Thug, Tyler the Creator, And Lil Uzi Vert are on the bill.

Chance has been pushing the boundaries as an independent artist, He is the example of what can be accomplished with solid team and social media savvy. His latest release, Coloring Book, is the first release to chart on Billboard 200 based on streams. The National Academy of Recording Arts and Sciences now considers free albums and mixtapes with regards to their nominations as a result of petitions and the large swell of support that Chance has garnered. This means that you do not have to sell an album to be considered for a Grammy. Not bad for Lil Chano from 79th.

Chance’s tour lines up the same weekend as AHH fest. AHH fest is the festival created by Common that is reviving itself after a yearlong break. It will be interesting to see how this plays out come September.